What is the most feared illness in the UK? Research from The Live-in Care Hub, (the organisation championing live-in care, as an alternative to residential), has found that 34 per cent of adults say dementia is the condition they are most scared of experiencing in later life. However, while there is an increased fear surrounding the disease, more than half admit they feel more comfortable talking about it than they did ten years ago (only a third would have been happy discussing it then).

Dominique Kent from The Live-In Care Hub, a coalition of 13 of the UK’s leading care companies (of which we too are a member,) explained: “For decades, dementia in all its forms was the great unspoken – but thanks to people like the author Terry Pratchett, who has been very open with his personal experiences of the condition, people are far more willing to talk openly about it.”

A diagnosis of dementia upon the whole family can be devastating with increased pressure on family relationships, lifestyles and finances. The research showed the top concerns include 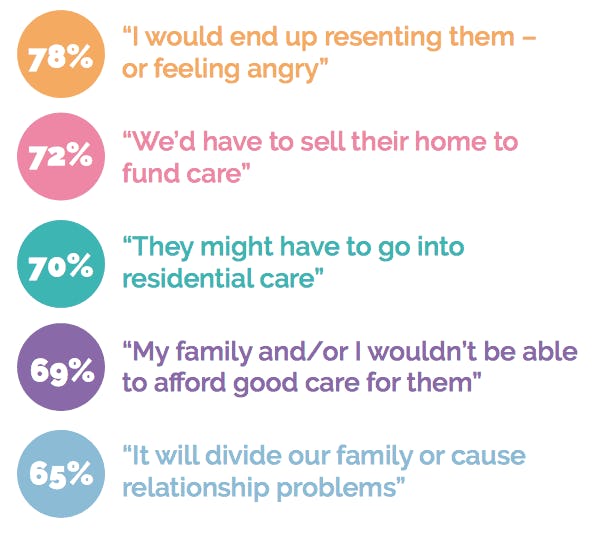 The findings, published in the Live-in Care Hub’s No Place Like Home report follow an Age UK digest,** which highlights loneliness as a key contributor to Alzheimer’s, the most common form of dementia. The research illustrated that those with a high degree of loneliness are twice as likely to develop Alzheimer’s as those who don’t feel lonely.

Dementia symptoms vary greatly from person to person and also depend on the dementia diagnosis. There are many different forms of dementia but the three main types include: Alzheimer’s Disease, Vascular Dementia and Dementia with Lewy Bodies. 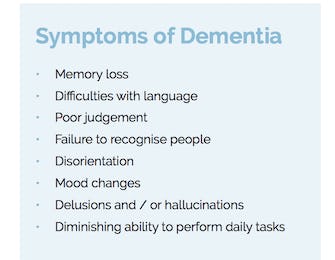 For more information on the symptoms of dementia, you can check out our Dementia guide and read the thoughts of 84-year-old Angus Hallman, a psychiatrist who specialised in mood and memory, as he reflects on his own dementia diagnosis.

In contrast, the research showed that having a stroke, hardly caused concern at all, despite being the the UK’s no. 4 killer and depending on its severity, can be just as debilitating and cruel. Only nine per cent of the respondents cited strokes as a worry, while heart disease too, although being the nation’s no. 1 killer, was feared by just four percent.

Live-in care is a wonderful support for dementia

“This is where the life enhancing live-in homecare option can help families in need of support looking after a loved-one with dementia,” Kent goes onto explain. “Live-in care also offers an efficient and effective solution to one of the NHS’s major issues – hospital ‘bed blocking’, especially where dementia patients are concerned. With experienced carers on hand 24/7 to provide a safe and proactively monitored convalescence environment at home, patients can be discharged when they are declared well enough to leave. Carers undertake around 85 per cent of the work often conducted by nurses.”

The research also showed that more than any other option, people want to be looked after in their own home (over half plumped for this even though the service is little known). Live-in homecare is not just about giving essential support such as washing, dressing, preparing meals and help with medication; it also provides companionship and means that there’s no need to leave behind beloved pets, which often happens when moving to a care home. Carers are also often specifically trained to cope with particular conditions like dementia, Parkinson’s, stroke, MS or palliative care.

For more information on live-in care, or how we can support you or a loved one with dementia, please don’t hesitate to get in touch.

* A nationally representative survey of adults was commissioned by The Live-In Care Hub via market research specialist Censuswide during January 2015. 1,040 over 16 year olds were surveyed.