It’s an emotional and distressing decision facing a growing number of elderly people who are no longer able to look after themselves: what to do with a much-loved pet when pets are often not allowed in residential care.

A survey (i) published by The Live-in Care Hub, a coalition of 13 leading live-in home care providers, including Trinity Homecare, has found that over two million people in Britain know an elderly person who has had to have their cat or dog put to sleep because they were moving into residential care.

In many cases, you pets are often not allowed in a care home, in fact, the research showed that up to 71 per cent of residential homes and sheltered housing schemes refuse to allow residents to have pets, causing elderly people real distress.

The survey found that 20% of elderly people with pets would refuse to go into care and that to avoid being separated from them meant that some would consider taking steps that might cause them harm. 17.4% said they would pretend they were in good health, 8.8% would make themselves more ill and shockingly, 4.3% of respondents said they would consider taking their own life if they had to move without their pet.

This research, coupled with another study from the elderly national helpline, The Silver Line – which revealed the extent of loneliness experienced by elderly people – shows the real distress amongst those facing residential care.

Dominqiue Kent from The Live-In Care Hub explains:“We wanted to highlight the distressing choices facing elderly people separated from their pets.” It is little surprise then, that the survey also found great support for live-in care at home and Kent continues:

“97% of older people in the UK don’t want to move into residential care, with what is often an institutional and regimented way of life, away from familiar surroundings, friends, family and pets.”

Live-in care means you can stay with your pets 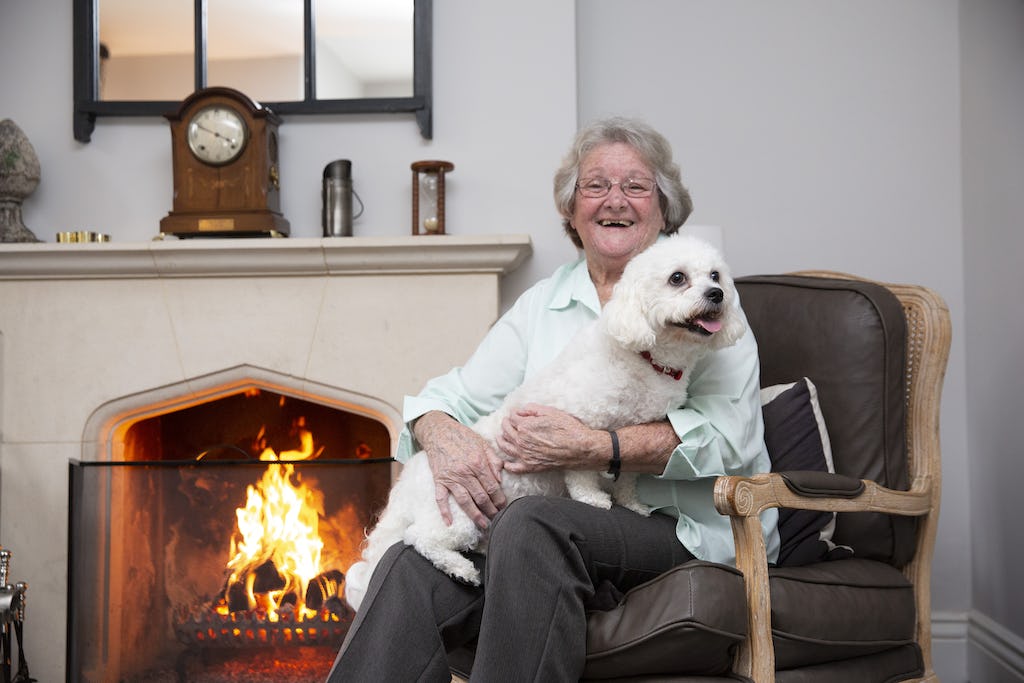 The Live-in Care Hub offers valuable insight into an alternative to residential care, meaning people need not be separated from their much-loved pets.

The organisation illustrates how, with the right professional support, elderly people can stay in their home, close to family, in familiar surroundings with the animal they love, rather than face a future in residential care without them.

The benefits experienced by elderly people who do choose to remain at home with a professional carer is also supported by a survey of adult social care published by Age UK [vi].

“Live-in care is a growing alternative to residential and nursing care allowing someone with high levels of need to remain at home and lead a good quality life in familiar surroundings. I expect live-in care to continue to grow in popularity and to become the high quality first care choice of many people.”

Health benefits – pets and the elderly

The Society for Companion Animal Studies [v], which promotes human-animal interactions, highlighted research showing the benefits pets bring to people suffering acute illness. According to the report, “pet ownership, particularly dog ownership, is probably associated with a decrease in cardiovascular dementia risk and may have some causal role in reducing that risk”.

Margaret, 83, benefited greatly from live-in homecare, which allowed her to stay with her beloved golden retriever, Henry. Margaret’s family became concerned in 2012 when she seemed to be more distant and vague. After a fall, she was hospitalised, where her one concern was to get back to Henry. Margaret was diagnosed with early stage dementia. It was clear she needed care, support and guidance for her memory impairment. Margaret’s family arranged for a live-in carer, Anne. who began to build a relationship with Margaret in hospital and managed the transition from hospital to home. Margaret is now well and supported by two carers, Anne and Olga. She walks Henry regularly and sees friends and neighbours. Her carer, Anne says:

‘’Henry has been such a comfort to Margaret over the years that I firmly believe he has been a fundamental influence to her wellbeing and recovery.’’

We’ve been providing live-in homecare since 1996 and are 100% committed to helping clients remain at home – with their pets. For further information or to set up a no obligation live-in homecare assessment, don’t hesitate to get in touch. and contact one of our live-in care managers today on 020 3 051 3787.

[i] Nationally representative survey of 1,000 adults commissioned by The Live-In Care Hub via market research specialist Censuswide during November 2014. Over 2 million Brits (2,081,878.60 – 4%) know someone who had to have their dog and/or cat put to sleep because of moving into a residential care or nursing home.” For the pets in a care home study, 1,637 over 16 year olds were surveyed.