91-year-old Dennis and 89-year-old Pat were able to celebrate their 70th anniversary during the lockdown, with the help of Trinity Homecare. The couple are currently receiving Trinity Homecare’s live-in care service after Dennis was diagnosed with bowel cancer and Pat had two strokes. The couple, along with their current live-in carer, Joana, share their heart-warming story of how two people fell in love, and are able to still enjoy life, with a TrinityCarer by their side.

Dennis and Pat met each other over 70 years ago when they had their first date. Pat was working as a telephone operator when she listened in on a call of Dennis speaking to his friend about seeing a film. Pat liked what she heard and plucked up the courage to call Dennis over the phone – despite not knowing each other. The couple got chatting and soon found themselves very interested in one another, soon taking the plunge to meet for a blind date. It is a moment which neither of them will forget, with Dennis describing it as “love at first sight.”

Pat says: “It was the best decision I had ever made. He is a very kind and romantic person. He is always very helpful and we work well together.”

Dennis and Pat over the years have made many fantastic memories. With three children of their own, three grandchildren and four great-grandchildren, Pat and Dennis have made an incredible life together, which they have mostly lived independently. Together, they love going to church, supporting local charities, cooking, and getting creative. 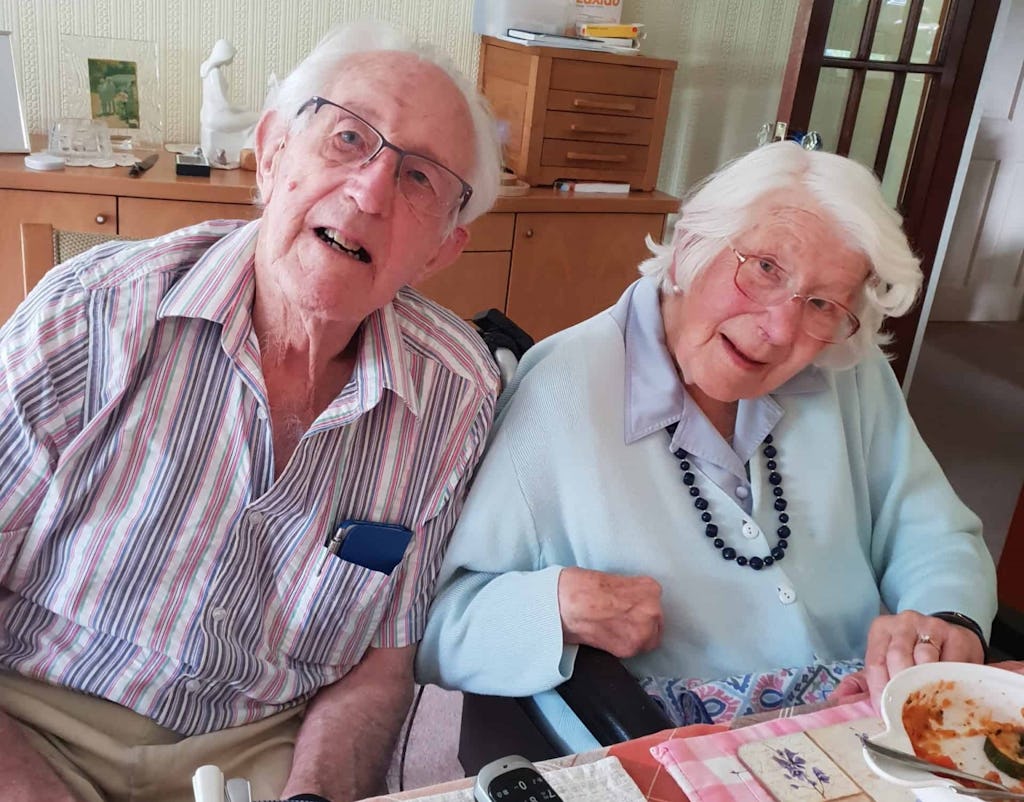 Pictured: Dennis and Pat having their 70th anniversary dinner date at home

However, in January 2019, they found themselves needing support after Dennis was diagnosed with cancer and Pat was suffering long term effects of a second stroke which has impacted her speech and mobility.

I was diagnosed with bowel cancer and I needed to go in to have an operation. At the same time, Pat had not long suffered two strokes, with the most recent one causing a bleed on the brain. I knew I couldn’t leave Pat whilst I was in hospital and I had no idea how long I would be gone for or what the outcome would be. Visiting care just wasn’t an option. A family member recommended Trinity Homecare and we soon decided live-in care was the route to go down as a care home would be too disruptive and we love our home too much. From then on I felt constant reassurance
– Dennis.

Since January 2019, Dennis and Pat have had live-in carers live with them to support them with day-to-day tasks such as cleaning, cooking, medication and personal care. Dennis has fully recovered from his bowel cancer and is able to support Pat as well but finds the help from the live-in carers very useful.

“The carers are very helpful. I am ok now and have the all-clear from cancer but I am a bit fragile. I would like to be more active, but that’s age for you! For Pat, she needs companionship and someone to talk to and the carers help a lot with that”, says Dennis.

Pat adds, “The carers we have had are absolutely perfect. They do things like bring my lunch and put it on the table for me. They are very good at what they do and are very efficient. Nothing is ever too much trouble and Dennis and I are very pleased with them. I feel supported and having the carers stay with us is a great relief.”

Since the lockdown, life has changed a little for them. Dennis usually likes to remain as independent as possible and tries to get out and about and do the shopping himself, once a week. Since the pandemic, he has not been able to do this and the couple has not been able to see their family as much as they would like to.

TrinityCarer, Joana, has been living with both Dennis and Pat since the lockdown began. Usually, her stay would be shorter but the lockdown restrictions mean she has stayed longer to ensure the safety of the couple, by reducing the number of carers living with the couple. 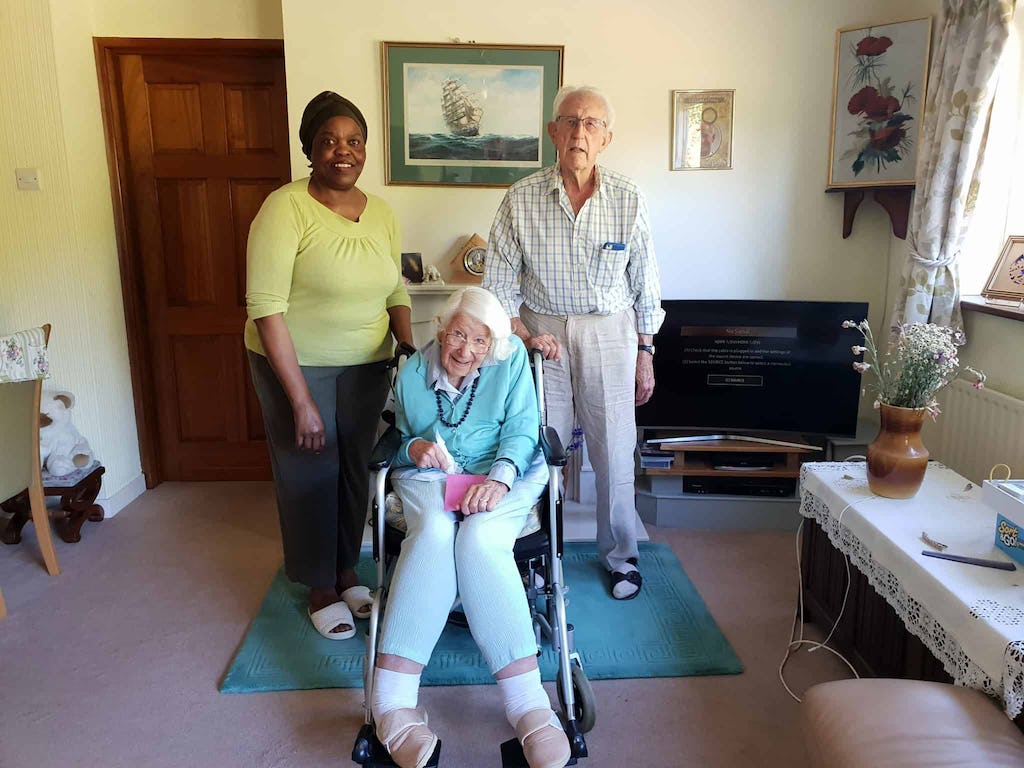 Joana is a managed live-in TrinityCarer and has been caring for people since she moved to the UK in 2002.

Joana explains, “I came from Zimbabwe in 2002 and started working as a carer in the UK. Care is something that has been in my family for many years and is very much who I am as a person. My mum was a nurse and my dad was a social worker. Dealing with people and being a part of the community is what we do best.”

The safe alternative during Covid-19
Find out why

Joana has been caring for Dennis and Pat on rotation since January and says she has a “very good bond” with the couple. She feels that she has been able to get to know the couple well and cooperatively, they have got a good routine in place.

Joana says: “I help mainly with personal care and getting Pat in and out of bed. Dennis likes to cook and so we take turns in the kitchen. When he is cooking, I keep Pat company, have a chat and do knitting with her. There is a very good arrangement in place.”

Since Pat’s last stroke, she has been unable to participate in some of the activities that she used to enjoy. Pat used to spend a lot of time doing upholstery, knitting, and other forms of art such as tapestry. Since her stroke, she has found it difficult to knit as she doesn’t have as much strength in her arms. Joana has helped her with this by offering shorter knitting needles and getting creative alongside her.

After my break, I sit with Pat and we both knit together. At times, I see her watching me, admiring my work. Together, Pat and I have knitted a blanket and I have also made four other pieces. We just really enjoy each other’s company and I think that’s the beauty of my job.

Joana was also able to assist with Dennis and Pat’s 70th anniversary and described it as a “really fantastic day and week” for them. For the anniversary, Dennis and Joana worked closely together in preparing a romantic meal for the couple to enjoy together. Care Manager, Barbara, also helped in giving advice on the cooking of the lasagne and soufflé.

It was so romantic and Patricia was very happy. They had received so many cards which decorated the table. They were both hugging and smiling and I know that their daughter really appreciated us helping organise the day. 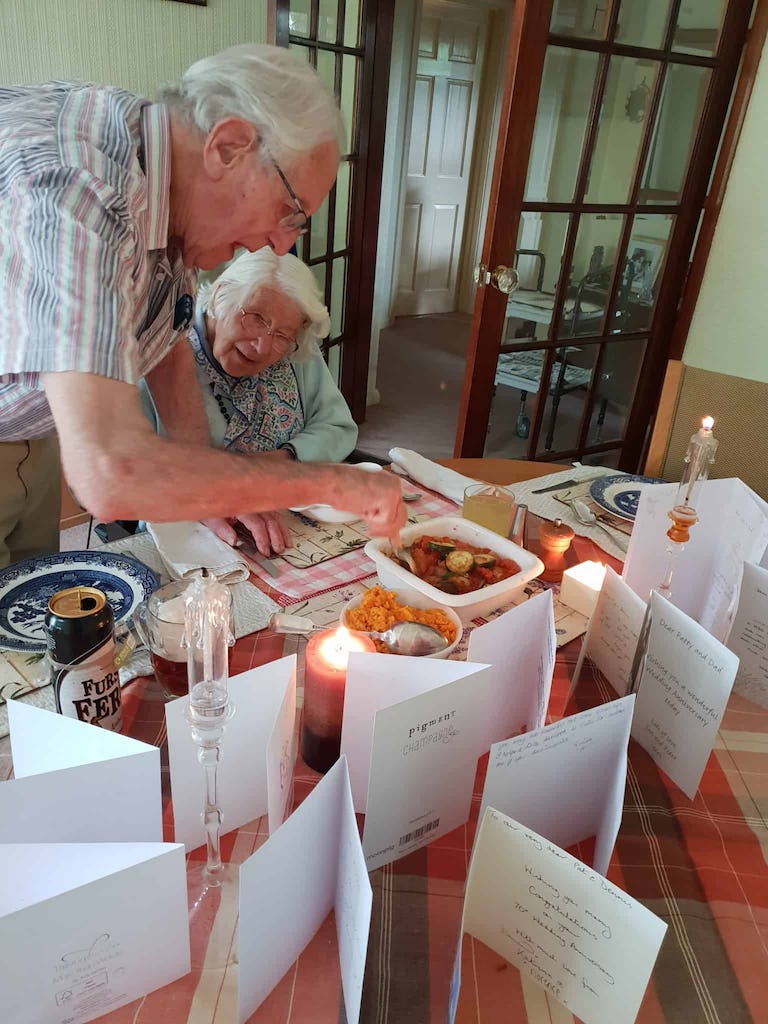 Pictured: Dennis serving dinner by candlelight for Pat on their 70th anniversary

Throughout the day, the couple received numerous phone calls. Their daughter had contacted their local vicar as they usually go to church on a regular basis. The vicar went round to a group of people that Dennis and Pat knew and he did a video call. With Joana’s support, the couple was able to do this and a great turn out of around 12 people who they would have seen outside of lockdown.

“Seeing everyone was extremely nice. With the support of Trinity, we were able to have zoom chats with some of our closest family and waved from our patio door to them as well. It really did make the day one to remember and we cannot thank Trinity and Joana enough for their help”, Dennis says.

Joana also feels the day ran smoothly and finds her work to be “very rewarding”.

“I enjoyed the day a lot. In my job, I can walk away knowing I have done something good and feel a great amount of appreciation from that. Trinity Homecare offers great job satisfaction and I would urge people to join here. If you have the passion and are able to act in a caring and dignified way, then you should consider working in care.”

“I worked in care homes before joining Trinity and whilst it is very similar, you are able to put a lot of focus and undivided attention into one person or a couple. It is also very safe for vulnerable people during the pandemic and I personally feel safer as well.”

Since their 70th anniversary, Joana continues to provide care for Dennis and Pat during the pandemic. Joana and Pat are both working towards another creative project which will be keeping them occupied.

Trinity Homecare would also like to wish the couple a very happy 70th anniversary. A truly wonderful milestone!